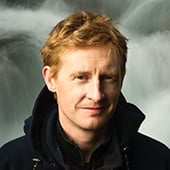 Callum Harland was born and raised in the Ruapehu region. His family have lived and worked in the area for more than a century.

Growing up he dreamed of wearing a silver fern on his chest, on either a black rugby jersey or a singlet. His best early memories include running, playing rugby and hunting with his Father.

He worked in possum control throughout the King Country for 10 years. He purchased Discovery Lodge in 2002 with his youngest brother, and his parents.

As well as running Discovery, he is a commercial helicopter pilot.

"There're no words to describe how special these mountains are. The power and beauty of this place is awe inspiring."